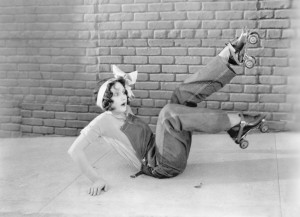 “I never was what you would call a fancy skater–and while I seldom actually fell, it might have been more impressive if I had. A good resounding fall is no disgrace. It is the fantastic writhing to avoid a fall which destroys any illusion of being a gentleman. How like life that is after all!”
~ Robert Benchley

We all make mistakes. It’s natural. A mistake is not always a mistake, often it’s a way we learn not to do it again. When someone asked Edison if he was upset over failing (or making a mistake) 10,000 times while inventing the light bulb, he said: “I haven’t failed. I found 10,000 ways that didn’t work!”

Most of us don’t have the same attitude about mistakes, or not doing it right the first time that Edison did. Often growing up, or in school we were embarrassed or laughed at for making a mistake and the experience made us not want to get caught making another (interesting that Edison was home schooled!). So when we do make a mistake we try to cover it up, explain it away, make excuses, or somehow avoid the fact that we made a mistake.

The problem with this is two fold. First, as Robert Benchley mentions the “fantastic writhing” to avoid admitting the mistake, or the appearance of the mistake often destroys any illusion of our looking like we know what we’re doing. While we’re tied up in our mistakes and trying to pretend they don’t exist, people around us can often see them quite clearly and the more excuses we make the more they catch on that we don’t have a clue what we’re doing.

The second part is that we can’t learn from a mistake if we refuse to admit it was a mistake. If we “prove” that we weren’t wrong, we condemn ourselves to repeating the same mistake over again. We get caught in our own confusion. The really sad part is that we begin to believe the lie ourselves; and become unable to self-correct because we never admit there is a problem. .

When this happens we loose the ability to learn from our environment, we spend enormous amounts of energy defending our actions, we loose credibility, and we get lost in the illusion we created about who we are and what we do. In the illusion we become rigid; and the more we defend the more unhappy we become although we’re never sure why. Think about someone you know who’s “always right” and see if it doesn’t fit. Now know you’re heading in that direction every time you refuse to admit a mistake.

So start a new habit. When you make a mistake – admit it. Life will give you lots of opportunities; and you just may learn something new!

About life & the adventure of living it conscious and awake.

"Nancy Baker has helped many rediscover direction in their lives. They also have acquired or reacquired - the courage to carry out their goals."
~ The Intelligencer
~~~
“I want to acknowledge Nancy’s commitment and care. She’s a great coach and a wonderful role model for our profession.”
~ Cheryl Richardson, New York Times bestselling author, coach and speaker.
Conscious Living