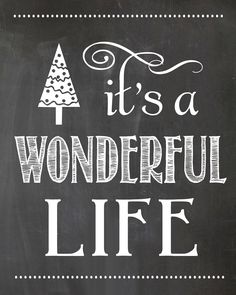 This week I watched “It’s a Wonderful Life” for a class I’m taking. (For any of you outside the US it’s a classic Christmas movie that was made in the 50’s that some of us watched every year).
George Bailey is the perfect example of living a purpose.

George, from the time he was a child, had big ideas. He was going to travel the world, be an architect, live and work in big cities. He had the brains and the persistence to make it too. Only one problem, every time he got ready to take off and follow his dreams there would be a crisis in the dinky little town he wanted to leave and his heart would tell him to stay. Each time he followed his heart.

Over time he sadly released his dreams, started a family, continued the business his father had started, and kept following his heart that lead him to help lots of people. He was generally happy and content until somebody reminded him he had given up his dream. At these times George would look at his life and feel like a failure.

When a big crisis comes and threatens to wash away everything George has ever done he becomes desperate. He considers suicide. He prays for help and God sends him Clarence, an angel who’s trying to earn his wings. Clarence shows George what the town would have been like had George never been born. The people who’s lives would have been wasted without the encouragement and hand up George gave.

In the end the townspeople rally around George, pulling him out of his crisis, thanking him for all he’s done for them, and letting him know he’s not alone.

Now the reason I bring up George Bailey and his story is that the calls and e-mails I’ve received make me realize that lots of people think like George. They think that if they didn’t follow their brain’s ideal, their child-self’s idea, or their dream of what their purpose was that they weren’t living their purpose. They thought that their purpose was somewhere out there. Somewhere where they were not.

Last month, when I talked about where I’d leave my loved one’s a message if I wanted them to get it I mentioned the refrigerator, the television, the computer. I didn’t mention the islands, in a mansion, or on easy street. The reason I didn’t mention any of those places is because that’s not where they are. And I believe that when the powers that be leave us a message about our purpose it’s left somewhere where we are likely to be.

What are the things you love about your life right now? Where are the areas you feel fulfilled? I’m not saying your purpose can’t be bigger or better things, but I think you’d agree that if you were running the show you’d expect people to handle well what they were already given before you gave them any more. If you wanted to promote someone would it be the person who was unhappy, complaining and doing their job half way or would it be the person who was doing a good job and wanting to continue to grow?

So living our purpose starts with doing well what is already in front of us. It’s often lived in baby steps, one at a time, taking us to where we want to go from where we are. Once we start life supports us and magic begins to happen. But we have to start from where we are.

What do you already love about your life? What’s already right? Pretend that angel Clarence is with you right now. What would he show you about your life so far that was right on purpose? What difference have you made already?

About life & the adventure of living it conscious and awake.

"Nancy Baker has helped many rediscover direction in their lives. They also have acquired or reacquired - the courage to carry out their goals."
~ The Intelligencer
~~~
“I want to acknowledge Nancy’s commitment and care. She’s a great coach and a wonderful role model for our profession.”
~ Cheryl Richardson, New York Times bestselling author, coach and speaker.
Conscious Living